How do Deucalion and Pyrrha escape the destruction of the world?

How are Deucalion and Noah MOST similar?

Look at this image, an engraving by Virgil Solis. What MOST likely is the reason that the artist chose to depict the new humans formed from stones as babies rather than full-grown people? 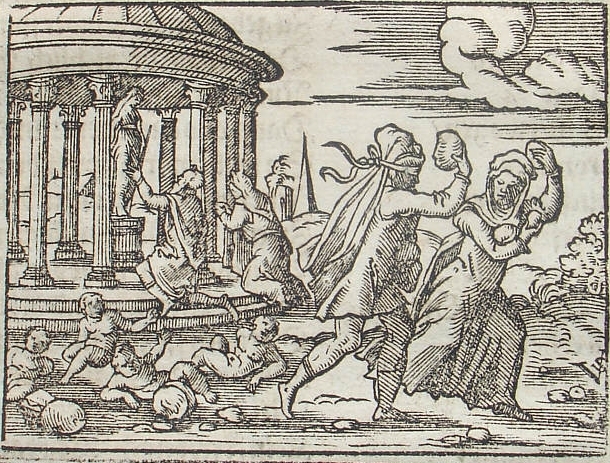 Read the following passage. Then answer the questions that follow it.

(1) John Jordan "Buck" O’Neil was a first baseman and manager in baseball’s Negro leagues during the thirties, forties, and fifties. He is best known for his playing career with the Kansas City Monarchs of the Negro leagues and as a coach and scout for the Chicago Cubs and Kansas City Royals in the major leagues.

(2) O’Neil was born Nov. 13, 1911, in Carrabelle, Florida. Due to racial segregation, he was denied the opportunity to attend high school in Sarasota, Florida, or play baseball in the major leagues. He began his baseball career with the Memphis Red Sox of the Negro leagues in 1937 and was traded to the Monarchs the following year. A tour of duty in the Navy during World War II briefly interrupted his playing career.

(5) O’Neil also joined the legendary Satchel Paige as a teammate during the height of the Negro League barnstorming days of the 1930s and 1940s. This was a period when teams of Negro all-stars would travel the countryside playing town teams, college teams, and teams of major leaguers to earn extra money and gain exposure for the Negro leagues.

(6) O’Neil left the Monarchs following the 1955 season, and in 1956, became a scout for the Chicago Cubs. In 1962, the Cubs hired him as a coach, making him the first black coach in Major League Baseball history. As a scout, he signed Hall of Fame outfielder Lou Brock to his first pro contract.

(7) He is sometimes credited with having signed future Cubs’ Hall of Fame second baseman Ernie Banks to his first pro contract, but, in fact, only signed him to his first MLB contract. Banks had actually been scouted and signed to the Monarchs by Cool Papa Bell, manager of the Monarchs’ barnstorming "B" team, in 1949. Banks played for the Monarchs in 1950 and briefly in 1953 when O’Neil was his manager.

(8) O’Neil has worked as a Kansas City Royals scout since 1988 and was named Major League Baseball’s "Midwest Scout of the Year" in 1998.

(9) O’Neil gained national prominence during the late 1990s with his poignant and compelling narration of Negro League history as part of Ken Burns’ PBS documentary on baseball. He has since been the subject of countless national interviews, including appearances on Late Night with David Letterman and the Late, Late Show with Tom Snyder.

(10) Today, Buck O’Neil serves as honorary Board Chairman of the Negro Leagues Baseball Museum (NLBM) in Kansas City, Missouri. He was a member of the eighteen-member Baseball Hall of Fame Veterans Committee from 1981 to 2000 and was instrumental in the induction of eight Negro League players during that time.

(11) O’Neil was a candidate in 2006 for induction into Major League Baseball’s Hall of Fame in a special vote for Negro League players, managers, and executives. However, he did not receive the necessary nine votes for induction from the twelve-member committee.

(12) O’Neil commented after hearing that he had not been elected to the Hall at age 94.

(13) "God’s been good to me," he told about two hundred well-wishers who had gathered to celebrate but instead stood hushed and solemn. "They didn’t think Buck was good enough to be in the Hall of Fame. That’s the way they thought about it, and that’s the way it is, so we’re going to live with that.

(15) O’Neil got the recognition he deserved posthumously. In 2008, two years after his death, the National Baseball Hall of Fame named him the first recipient of the Buck O’Neil Lifetime Achievement Award.

5. The theme of the passage can BEST be summarized by which of the following?