What does the phrase "take the plunge" mean as it is used in the passage?

Which detail from the passage best supports the answer to Part A?

What source would most likely provide more information on how to train a potbellied pig?

Did you know that pigs are more intelligent than cats and dogs? It’s true. In fact, pigs are the fourth most intelligent animal on Earth. Yet few people know very much about these wonderful creatures. Here are some interesting facts about pigs that you probably did not know.

1 Pigs have good memories and can recognize and remember up to thirty other pigs.

2 Pigs have a good sense of direction and are able to find their way over long distances.

3 Pigs are easily trained to walk on a leash, use a litter box, and do tricks.

4 Pigs are very social animals. They sleep together huddled in nests. And while they sleep, they love to cuddle up close to one another.

5 Pigs are genetically similar to humans, which is why doctors have been able to transplant pig heart valves into humans.

6 Pigs love water, and they are excellent swimmers.

7 The bond of a mother pig and her piglets (baby pigs) is as strong as that of any human mother and baby.

8 Pigs are very vocal animals and have a wide range of communicative calls made up of grunts, squeaks, snarls, and snorts.

9 Pigs are very affectionate, and they touch snouts as a friendly greeting. Pigs also make good companion animals for people.

11 Pigs are sensitive animals that can experience both happiness and sadness.

12 "As happy as a pig in mud" is a saying often used to express how much fun someone is having. Actually, pigs do not like to be dirty. Pigs wallow in mud to stay cool on hot days and to protect themselves from getting a sunburn. In fact, pigs are so clean that they can be kept indoors and bathed like cats and dogs.

13 Piglets love to play, in ways very similar to those of human children, such as chasing one another, running in circles, squeaking and grunting in sheer delight, pretend fighting, and exploring their environment. Play is an important part a piglet’s development. Pigs also like "toys" such as an old blanket and cardboard boxes.

14 There are many stories of pigs that have saved the lives of humans. For example, a pet pig called Pru pulled her owner out of a muddy bog, and another pig, Priscilla, saved a young boy from drowning.

15 Like humans, pigs are omnivores, meaning they eat both plants and other animals. 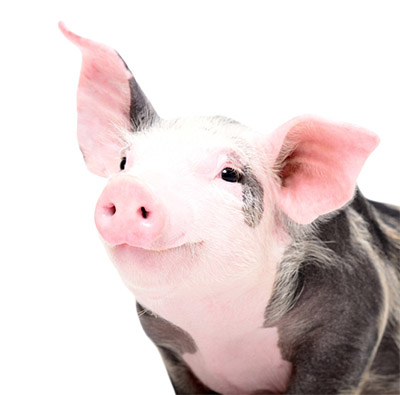 What is the best summary of this passage?

Read this sentence from the passage.

"Some pigs are more happy and content while other pigs are highly sensitive and suffer with depression."

All of these words are synonyms of the word content except