What is the main conflict of this passage?

Paragraph 1 is which part of the plot?

Paragraphs 3 and 4 are which part of the plot?

1 It was just another perfect day in paradise. The Sun was just beginning to warm the day, and outside the birds were happily chirping along the morning gossip. Looking out my window, I saw a picture perfect postcard: coconut palms in the foreground, silhouetted against a robin’s egg-blue sky. I could hear the ocean quietly roaring in the distance. And I felt a sudden urge to feel the white sand under my feet. I walked outside and strolled down our private road to the beach. I walked out onto the soft, white sand and looked around; I was happy to see there was no one on the beach. I drew a deep, cleansing breath of sea air and looked up into the sky just in time to see a winged man.

2 Yes, a man with wings swooped down and made a perfect landing in front of me. He stood about six feet tall with longish blonde hair and pale blue eyes. He was wearing faded Levis and an a crisp, white tee-shirt. He looked very normal, actually, except for the wings, that is. He was an angel in jeans. His wings were mostly brown with white tips and must have spanned at least eighteen feet across. Before I could begin to recover my senses, he yelled for me to hold on. Crack! There was a blinding flash of light, and I felt my skin ripple. I opened my eyes, and we were sitting in a beautifully furnished office. I felt like I had just gotten off the Space Mountain ride at Disney World. I shook myself in an attempt to clear my head.

3 Where was I? What was going on? I figured I must be dreaming or going insane. Before I could make sense of anything, a door opened on the opposite wall. The school principal walked in and stood next to the angel. She had that look on her face. Oh no, I was in trouble now. Closing my eyes, I put my head down. I couldn’t look her in the face. "Mr. Sanchez? I think you have some explaining to do. Mr. Sanchez? Mr. Sanchez, I’m talking to you. Mr. Sanchez?" she said. I opened my eyes and saw my English teacher standing over my desk. Rubbing my eyes, I looked around for the angel. What? On my desk in front of me was the short story I had been writing. I must have fallen asleep. "Mr. Sanchez, do you need to go see the principal? There will be no napping in this class," my teacher said. "I’m sorry, Ms. Ritter. I’ll finish my story," I said. 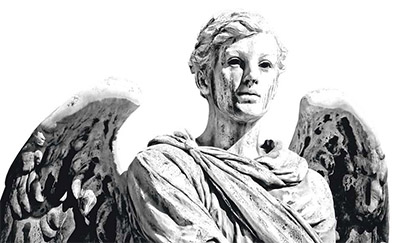 The tone of this passage goes from