What is Patrick Henry’s claim?

How does the statement "give me liberty or give me death" contribute to development of ideas presented in Henry’s speech?

Why were some patriots opposed to Patrick Henry’s point of view?

This book was written in 1887, one hundred and twelve years after Patrick Henry gave his famous speech. A message from the author states, "In this book I have tried to embody the chief results derived from a study of all the materials known to me, in print and in manuscript, relating to Patrick Henry,—many of these materials being now used for the first time in any formal presentation of his life. It is proper for me to state that I have been able to make use of a large number of manuscripts relating to my subject. Of these may be specified a document, belonging to Cornell University, written by a great-grandson of Patrick Henry, the late Rev. Edward Fontaine, and giving, among other things, several new anecdotes of the great orator, as told to the writer by his own father, Colonel Patrick Henry Fontaine, who was much with Patrick Henry during the later years of his life."

On Monday, the 20th of March, 1775, the second revolutionary convention of Virginia assembled at Richmond…Accordingly, on Thursday, the 23d… Patrick Henry took the floor and moved the adoption of the following resolutions, supporting his motion, undoubtedly, with a speech:

"Resolved, That a well-regulated militia…is the natural strength and only security of a free government; that such a militia in this colony would forever render it unnecessary for the mother country to keep among us for the purpose of our defense any standing army of mercenary forces…

"Resolved, That the establishment of such a militia is at this time peculiarly necessary, by the state of our laws for the protection and defense of the country… in this time of danger and distress, to rely that opportunity will be given of renewing them in general assembly, or making any provision to secure our inestimable rights and liberties from those further violations with which they are threatened…

A clergyman who was in attendance stated: –

"Henry rose with an unearthly fire burning in his eye. He commenced somewhat calmly, but the smothered excitement began more and more to play upon his features and thrill in the tones of his voice. The tendons of his neck stood out white and rigid like whip-cords. His voice rose louder and louder, until the walls of the building, and all within them, seemed to shake and rock in its tremendous vibrations. Finally, his pale face and glaring eye became terrible to look upon. Men leaned forward in their seats, with their heads strained forward, their faces pale, and their eyes glaring like the speaker’s. His last exclamation, ‘Give me liberty, or give me death!’ was like the shout of the leader which turns back the rout of battle. The old man from whom this tradition was derived added that, ‘when the orator sat down, he himself felt sick with excitement. Every eye yet gazed entranced on Henry. It seemed as if a word from him would have led to any wild explosion of violence. Men looked beside themselves.’" 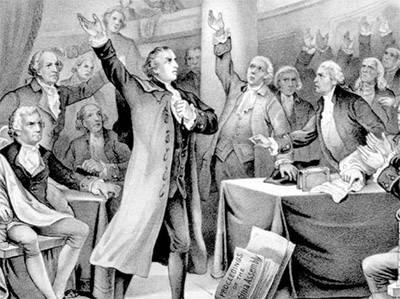 How is second passage most different from the first passage?

Aside from manuscripts, what other type of evidence does the author say he received from Henry’s great grandson, Rev. Edward Fontaine for his book?