What does the word economical mean as it used in sentence 16?

How does paragraph 1 develop the plot of the passage?

Which detail from the passage best supports the answer to Part A?

What is the mother’s point of view about Harry leaving home?

Excerpt from Ragged Dick Or, Street Life in New York with the Boot-Blacks by Horatio Alger

1 Dick shouldered his shoeshine box and walked up as far as the Astor House. He took his station on the sidewalk, and began to look about him.

2 Just behind him were two persons,—one, a gentleman of fifty; the other, a boy of thirteen or fourteen. They were speaking together, and Dick had no difficulty in hearing what was said.

3 "I am sorry, Frank, that I can’t go about, and show you some of the sights of New York, but I shall be full of business to-day. It is your first visit to the city, too."

5 "There’s a good deal worth seeing here. But I’m afraid you’ll have to wait to next time. You can go out and walk by yourself, but don’t venture too far, or you will get lost."

7 Now Dick had listened to all this conversation. Being an enterprising young man, he thought he saw a chance for a speculation, and determined to avail himself of it.

8 Accordingly he stepped up to the two just as Frank’s uncle was about leaving, and said, "I know all about the city, sir; I’ll show him around, if you want me to."

9 The gentleman looked a little curiously at the ragged figure before him.

12 "And you know all about the public buildings, I suppose?"

17 "I don’t know what to say, Frank," he remarked after a while. "It is rather a novel proposal. He isn’t exactly the sort of guide I would have picked out for you. Still he looks honest. He has an open face, and I think can be depended upon."

18 "I wish he wasn’t so ragged and dirty," said Frank, who felt a little shy about being seen with such a companion.

19 "Have you always lived in New York, Dick?" asked Frank, after a pause.

21 "I wish you’d tell me a little about yourself. Have you got any father or mother?"

22 "I aint got no mother. She died when I wasn’t but three years old. My father went to sea; but he went off before mother died, and nothin’ was ever heard of him. I expect he got wrecked, or died at sea."

23 "And what became of you when your mother died?"

24 "The folks she boarded with took care of me, but they was poor, and they couldn’t do much. When I was seven the woman died, and her husband went out West, and then I had to scratch for myself."

30 "If everybody was like you and your uncle," said Dick, "there would be some chance for poor people. If I was rich I’d try to help ‘em along."

31 "Perhaps you will be rich sometime, Dick."

33 "That depends very much on yourself, Dick," said Frank. "Stewart wasn’t always rich, you know.""Wasn’t he?"

34 "When he first came to New York as a young man he was a teacher, and teachers are not generally very rich. At last he went into business, starting in a small way, and worked his way up by degrees…If there was a chance for him, Dick, there is a chance for you."

36 "I know so. A boy who has earned his own living since he was seven years old must have something in him. I feel very much interested in you, Dick. You’ve had a hard time of it so far in life, but I think better times are in store. I want you to do well, and I feel sure you can if you only try."

38 "And you must not only work hard, but work in the right way."

40 "You never steal, or do anything mean or dishonorable, however strongly tempted to do so. That will make people have confidence in you when they come to know you. But, in order to succeed well, you must manage to get as good an education as you can. Until you do, you cannot get a position in an office or counting-room, even to run errands."

41 "That’s so," said Dick, soberly. "I never thought how awful ignorant I was till now."

42 "That can be remedied with perseverance," said Frank. "A year will do a great deal for you." 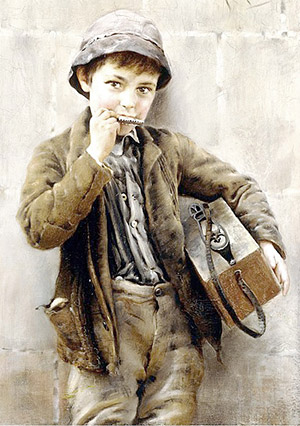 What is the central idea of both passages?