About 65 million years ago, all the large land-dwelling dinosaurs and many other forms of life on Earth became extinct. This mass extinction event, known as the Cretaceous-Paleogene event, was brought on by a number of geological occurrences. First, widespread volcanic eruptions released high levels of dust and greenhouse gases into the atmosphere. The dust interfered with sunlight, killing off many plants, while the gases caused a rapid temperature spike. These changing conditions would have caused a slow extinction between 68 and 66 million years ago. Around the same time, sea levels dropped. Dropping sea levels led to decreased marine diversity and further climate change, causing stress to life on land. About 65 million years ago, an asteroid struck the Yucatan Peninsula in Mexico, launching more dust into the atmosphere and further blocking light. Some scientists claim that the asteroid impact alone is a sufficient explanation for the mass extinctions. However, only a combination of factors, including reduced sea levels and increased volcanic activity, would provide the right environment for the extinctions to occur. 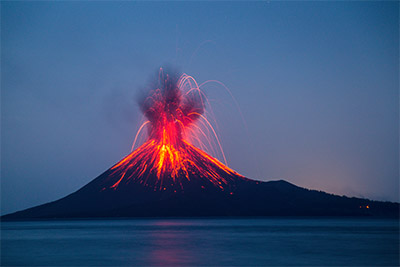 On which of following can readers infer the authors of both passages would most likely disagree?

Which of the following pieces of evidence, if valid, would most call the conclusion of Passage 1 into question?

Which of the following statements best characterizes the relationship between Passage 1 and Passage 2?

The author of Passage 1 could potentially agree with all of the following statements except: