What does the word poachers mean as used in paragraph 8 in the passage?

Which of the following best summarizes why the matriarch is so important to the elephant family?

What is the author’s purpose in paragraph 5 in the passage?

What are the advantages for the author of depicting a mother elephant with her calf early in passage 1?

1 Elephants, the most prodigious land animals on the planet, have some of the most complicated group rituals of any animal. They are complex, passionate animals that openly express joy, anger, grief, compassion, and love. Through years of research, scientists have found that elephants are capable of rational thought and deep feelings. The emotional attachments elephants form with family members are equal to our own emotional family attachments.

In the wild, joy is an emotion that elephants have no shame in showing. They express their happiness and joy when they are with their family and friends. Playing games and greeting friends or family members are some ways that elephants show joy. Elephants also express extreme joy when a baby elephant is born. Family members bellow and trumpet during the birth of the new baby. Elephants also show joy when reunited with family members. The greeting ceremony begins as elephants begin calling each other from a quarter a mile away. As they get closer, their pace quickens. The elephants run toward each other, screaming and trumpeting the whole time. With heads held high, the reunited pair fill the air with sounds of trumpets, rumbles, screams, and roars.

There is no greater love in the animal kingdom than that of a mother elephant and her baby. The calf is very small compared to the mother, so the calf walks under its mother for protection. Mother and baby constantly touch each other to form a close and loving bond. If a calf strays too far from its mother, she will bring it back to her. She bathes the baby, using her trunk to spray water over it and then to scrub it gently. The mother steers her calf by grasping its tail with her trunk, and the calf follows, holding its mother’s tail. When the calf squeals in distress, its mother and others rush to its protection immediately.

One of the most moving displays of elephant emotion is the grieving process. While standing over the remains of a recently deceased elephant, elephants may touch the bones of the dead elephant, smelling them, turning them over and caressing the bones with their trunks. Researchers don’t quite understand the reason for this behavior. They guess the elephants could be grieving. Or they could they be reliving memories. Or perhaps the elephant is trying to recognize the deceased. Whatever the reason, researchers suspect that the sheer interest in the dead elephant is evidence that elephants have a concept of death. Elephants remember and mourn loved ones, even many years after their death. When elephants walk past a place that a loved one died, they will stop and be still for several minutes. When a beloved elephant family member dies, those left behind will mourn by "burying" the body with leaves and grass, and keeping vigil over the body for a week. And just like humans, elephants visit the gravesites of their lost loved ones.

Terror is expressed when baby African elephants wake up screaming in the middle of the night after they have witnessed their families murdered and poached. Scientists believe that this is a type of Post-Traumatic Stress Disorder. Researchers indicate that the recent surge in cases of wild elephant rage is a sad indicator of the kind of stress that wild elephants are experiencing. Nearly 300 people are killed every year by wild elephants in India due to the increasing number of people in traditional wild elephant habitats. The ongoing competition between elephants and humans for available land and resources is leading to unfortunate and often deadly consequences. This is because elephants fiercely guard and protect calves. Adult elephants will go into a rage if they think a calf is in danger. They will charge a village, storm into huts, destroy fields, and sometimes kill humans.

In addition to mourning the loss of their own family members, elephants show compassion when non-family elephants die. Older females of different herds gather their families at the remains of a deceased elephant. Elephants also show compassion towards injured members of the herd. If an elephant hurts its foot or leg, the rest of the herd will walk slowly so that the injured elephant does not become separated from its family. Researchers say that this shows that elephants truly care about each other whether they are related or not. 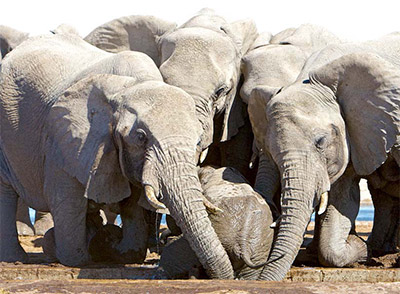 Which statement best expresses the central idea of the passage?