The table below lists different types of clouds and the average altitude at which they generally form. Use the table to answer the question.

According to Theory 2, which type of cloud would have the greatest cooling effect on climate? 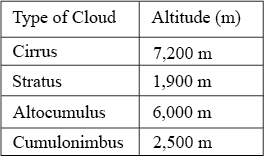 Melting sea ice changes the cooling capacity of the surface of the oceans. Water absorbs more solar radiation than ice. As sea ice melts, the absorption of solar radiation increases, raising sea surface temperatures and evaporation rates. Which theory do these statements support?

A study will be conducted to test the probability of these future climate scenarios. Which of the following topics would be most important to study to determine the likelihood of Theory 2?