What does the word temperate mean as it is used in paragraph 2 of the passage?

Which detail from the passage supports your answer to Part A? 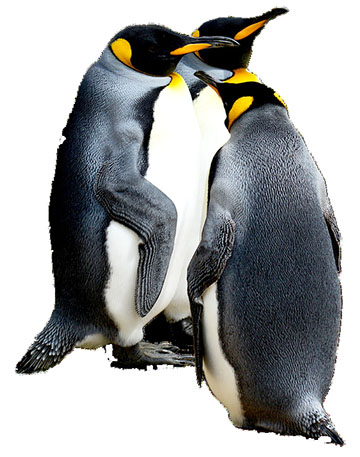 1. Most penguins live in the Southern Hemisphere.

2. The Galapagos penguin is the only kind of penguin that lives at the equator.

3. Large penguin populations can be found in countries such as New Zealand, Australia, Chile, Argentina, and South Africa.

4. No penguins live at the North Pole.

5. Penguins eat a range of fish and other sea life that they catch underwater.

6. Penguins spend around half their time in water and the other half on land.

7. The Emperor penguin is the tallest of all penguin species, reaching as tall as 47 inches in height.

8. Emperor penguins can stay underwater for around 20 minutes at a time.

9. Emperor penguins often huddle together to keep warm in the cold temperatures of Antarctica.

10. King penguins are the second largest penguin. They have four layers of feathers to help keep them warm on the cold subantarctic islands where they breed.

11. Chinstrap penguins get their name from the thin black band under their head. At times it looks like they’re wearing a black helmet.

12. Crested penguins have yellow crests, as well as red bills and eyes.

13. Yellow eyed penguins are endangered penguins native to New Zealand. Their population is believed to be around 4,000.

14. Little Blue penguins are the smallest type of penguin, averaging around 13 inches in height.

16. Penguins in Antarctica have no land-based predators.

17. Penguins have an oil gland that makes waterproofing oil. Penguins spread this oil across their feathers to insulate their bodies and reduce friction when they glide through the water.

18. Once a year, penguins lose all of their feathers. Most birds lose feathers and regrow them a few at a time throughout the year. But penguins lose them all at once. They can’t swim and fish without feathers. So they fatten themselves up beforehand to survive the 2–3 weeks it takes for the feathers to grow back.

19. Male and female penguins take turns sitting on the eggs and taking care of the babies.

21. Penguins are excellent swimmers, but they can’t fly.

22. Penguins appear the most often in movies. Of all the seabirds, they might be the most lovable.

23. Emperor penguins are the deepest divers. They can reach depths of 870 feet.

Which type of penguin can reach depths of 870 feet?

Read the peom and then answer the questions that follow

What is the meaning of the word fiery as it used in line 3 of the poem?

Which line from the poem best supports the answer to Part A?