This graphic is intended to show —

An author would include this graphic along with information about photosynthesis — 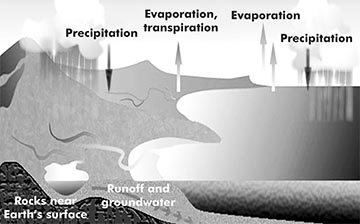 Read the following passages. Then, answer the questions 3 - 6 that follow.

Clouds form when there is water in the sky. Water from the ground gets pulled back up into the sky. This is called evaporation.

Evaporation is when a liquid changes to a gas form. Water becomes vapor. This happens faster in warmer places. For example, think about a cup of water standing on a table. It might take a week or two for all the water to evaporate. But you could boil the same amount of water in a pot on the stove. It would turn to vapor in minutes.

Plants get water from the soil. The water moves from the roots up to the stems. It winds up in the leaves. From the leaves, some of the water evaporates into the air. Where there are many plants and trees, like in forests, a large amount of water transpires into the air.

When the water cools, it becomes clouds. This is called condensation. Clouds are made of tiny droplets of water. When they gather in the sky, you can see the droplets in the form of clouds.

Cumulus clouds are big, white, and puffy. They are not very high in the sky. When these clouds fill up with rain, they might turn dark and gray.

Cirrus clouds are thin, wispy clouds. They are really high in the sky. These clouds can come after a storm.

According to paragraph 2, what makes water evaporate faster?

What is the best way to describe cumulus clouds?

The author put the water cycle graphics in the passage for what two reasons?

to make the water cycle information easier to understand

to entertain readers with a graphic about the water cycle

to illustrate precipitation, transpiration, and evaporation 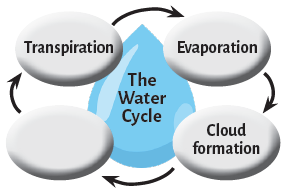 Look at this graphic. Which step of the water cycle would go in the blank circle?

Read the passages below. Then, answer the questions 7a - 7b that follow.

Childhood is a time of learning and adventure. Read books to children and teach them to read. Teach them their ABC’s and numbers. Teach children the rules of life, such as treat people the way you want to be treated. Teach children to love and respect one another. Children should also learn their likes and dislikes. Give them new foods to eat. Let them pick out their own clothes sometimes. Childhood is a time to explore the world. It gives children the chance to find their place in the world and be happy. But most of all, let children be children.
1 pt
7a.

What is the author’s point of view about childhood?

What are three graphics the author could have used in this passage?